Dr. Tetyana Ignatova and her collaborators received a grant from in the amount of $525,000 from the U.S. Department of Defense (DoD) for a project entitled “Advanced Tunable and Functional Materials for Soldier Protection”.

Dr. Kristen Dellinger, along with a group of colleagues in the Department of Nanoengineering, received a grant in the amount of $525,000 from the U.S. Department of Defense (DoD) for a collaborative project entitled “Advanced Materials for Chemical and Biological Sensor Technology to Protect the Soldier”.

Dr. Obare has been named as a regional Power Player for the 4th year by the Triad Business Journal for game changing initiatives in the Piedmont Triad Region.

Prof. Lifeng Zhang from the Department of Nanoengineering, was honored twice at North Carolina A&T State University’s annual Celebration of Faculty Excellence, as the recipient of the 2022 Senior Researcher of the Year Award and for the U.S. Patent he received titled “Green Epoxy Resin with Biobinder from Swine Manure”. 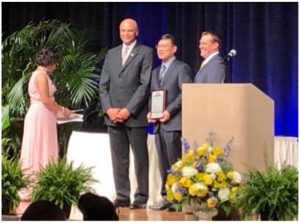 Support for Research Excellence (SuRE) Award

Journal Cover: Porous materials such as zeolites and metal-organic frameworks (MOFs) have a variety of applications, including the preparation of ion exchange resins, gas separation agents, and catalysts for the oil industry. In a new research project developed entirely at the JSNN, Associate Professor of Nanoscience Hemali Rathnayake and coworkers have prepared and fully characterized a novel thermally and chemically stable coordination polymer derived from iron (II) ions and tannic acid, a readily available natural polyphenol (Sustain. Chem. 2022, 3, 192-204). Significantly, the new bioinspired material has been used to extract toxic lead (II) ions from aqueous solutions with a 99% removal efficiency, a result that was recognized on the cover of the most recent issue of the aforementioned peer-reviewed journal. 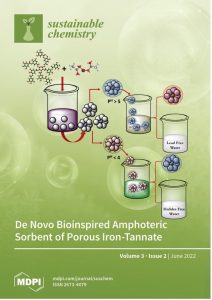 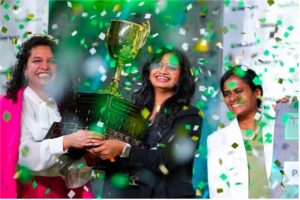 the use of proprietary membrane technology to selectively (and reversibly) extract lithium ions from various water sources.  The team won $100,000 as the grand prize.

Journal Cover: Macromolecular Chemistry and Physics selected the work of Dr. Hemali Rathnayake and co-workers that demonstrates the synthesis of bioinspired nanoflowers by developing a novel self-assembly approach “coordination and go”, representing a mimicry of nature’s double peony flower. This novel approach could provide deeper understanding in the paradigm of design, synthesis, self-assembly, and fabrication of semi-syn-bio superstructures. 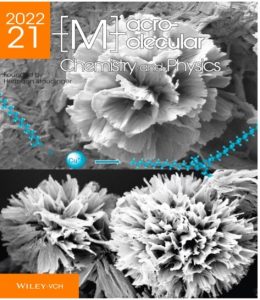 Dr. Hemali Rathnayake has been honored with one of the 2022 TechConnect Innovation Awards given annually at the TechConnect World Innovation Conference and Expo, the world’s largest and longest running nanotechnology event, held on June 13-15, 2022, in Washington, DC. Partnering with Minerva Lithium LLC, a UNCG spinoff company founded in 2020 by Dr. Rathnayake and former JSNN student Sheeba Dawood, the joint project entitled “Bio-Based Solid-State Lithium-Ion Battery Technology” was recognized as one of the top 15% technologies among submitted entries, as judged by the TechConnect Corporate & Investment Partner Committee. The new technology aims to develop a commercially viable and eco-friendly solid-state battery to meet the demand for energy storage in the solid-state battery market.

Dr. Hemali Rathnayake received a NC Collaboratory award in the amount of $75K. 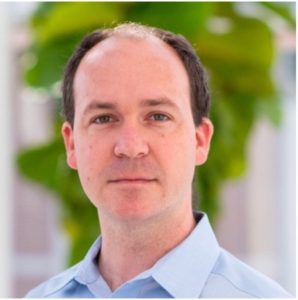 The Josephs lab focuses on research in the areas of nanoscience and molecular biophysics for better biotechnologies. Projects in the group focus on ee-engineering biomolecular systems with novel or enhanced functionalities to improve the ability to detect and treat genetic diseases. The group is also involved in discovering new molecular tools to understand mechanisms that modulate genetic stability in industrially and clinically important species. These recent awards bring the total of grant funds acquired by Dr. Josephs from NIH, NSF, NCBC, UNCG, and the UNC system office, to $2.95M since August 2018 when he joined JSNN.