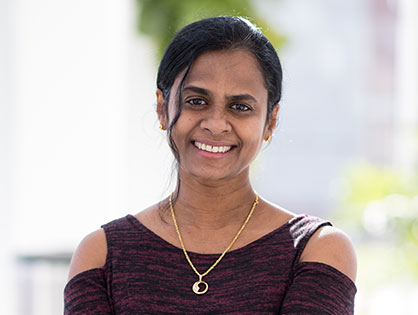 Dr. Rathnayake’s research work has contributed to the field of optoelectronic devices, particularly for the development of organic light emitting diodes, which are nowadays using in flat panel displays. Dr. Rathnayake’s work has been published in highly rated peer-reviewed journals such as Nanoscale, Macromolecules, Chemistry of Materials, the Journal of Material Chemistry, RSC Advances, and the New Journal of Chemistry. Her research has received ~ $3.5 million in funding including recent awards from the NASA NC Space Consortium and the Department of Defense. Her service to UNCG includes: University Grievance committee, Research Policies Committee, Scholarly Communication Committee, and in the past as the Department Director of Graduate Studies.

Marzieh Moradi, Bailey M Woods, Hemali Rathnayake, Stuart J Williams, and Gerold A Willing, “Effect of functionalization on the properties of silsesquioxane: a comparison to silica”, J. of. Colloid and Polymer Science 2019, 297 (5), 697-704.